From unemployed to shooting for the stars:  How an apprenticeship changed River Manning’s Life

Everyone has experienced one or more roadblocks to their dream career at one point or another, and apprenticeship graduate River Manning, is no different. Having been in a few motor vehicle accidents, River found themselves seeking any opportunity to get into the tech field. A creative and determined individual, they had initially been pursuing a degree in video game art. “I was trying to get my degree in video game art, but I wasn’t able to complete the program, due to my injuries,” said River.

River discovered their passion for technology with encouragement from a former mentor in their previous role as a Customer Delivery Representative for a talent management company. After their motor vehicle accident, they became unemployed. “That’s when I decided to cultivate my love of technology into a possible career path. I loved learning coding languages in my own time, so I knew that was the right thing for me to step into next.”

While scrolling through Facebook one day in October of 2020, River came across the IBM Z Apprenticeship program delivered by Franklin Apprenticeships. “I thought, you know what, there have been worse things that sounded too good to be true. Best-case scenario, it’s a risk but one I’m willing to take.” That risk was certainly worth it. River applied for the program and finished their IBM Z Pre-Apprenticeship in time to qualify for interviews at M&T Bank in January 2021.

Having been to college, River found that an apprenticeship program was the perfect fit for them. “Coaching makes all the difference when it comes to college versus an apprenticeship,” said River. “Knowing there was someone to hold me accountable while acknowledging that I’m human and I was going to have setbacks made all the difference in the world.”

After being hired as a Mainframe Systems Administrator Apprentice at M&T Bank in Buffalo, NY, River found their confidence growing. “When I started the apprenticeship, I didn’t have a lot of confidence in my ability. I had the aptitude, I just didn’t have a lot of encouragement growing up,” they said. Encouragement from the team at M&T, their manager, and their Franklin Professional Success Coaches played a significant role in River’s success. “Their support was invaluable,” they said. “I don’t think I could’ve completed the program without my coaches.”

River’s experience with Franklin Apprenticeships has been life changing. “My apprenticeship has changed a lot for me,” they said. “I’ve kind of dug myself out of poverty, thanks to this opportunity. But I also found a sense of confidence and belief in myself. To know that I have this in me is honestly life changing.” 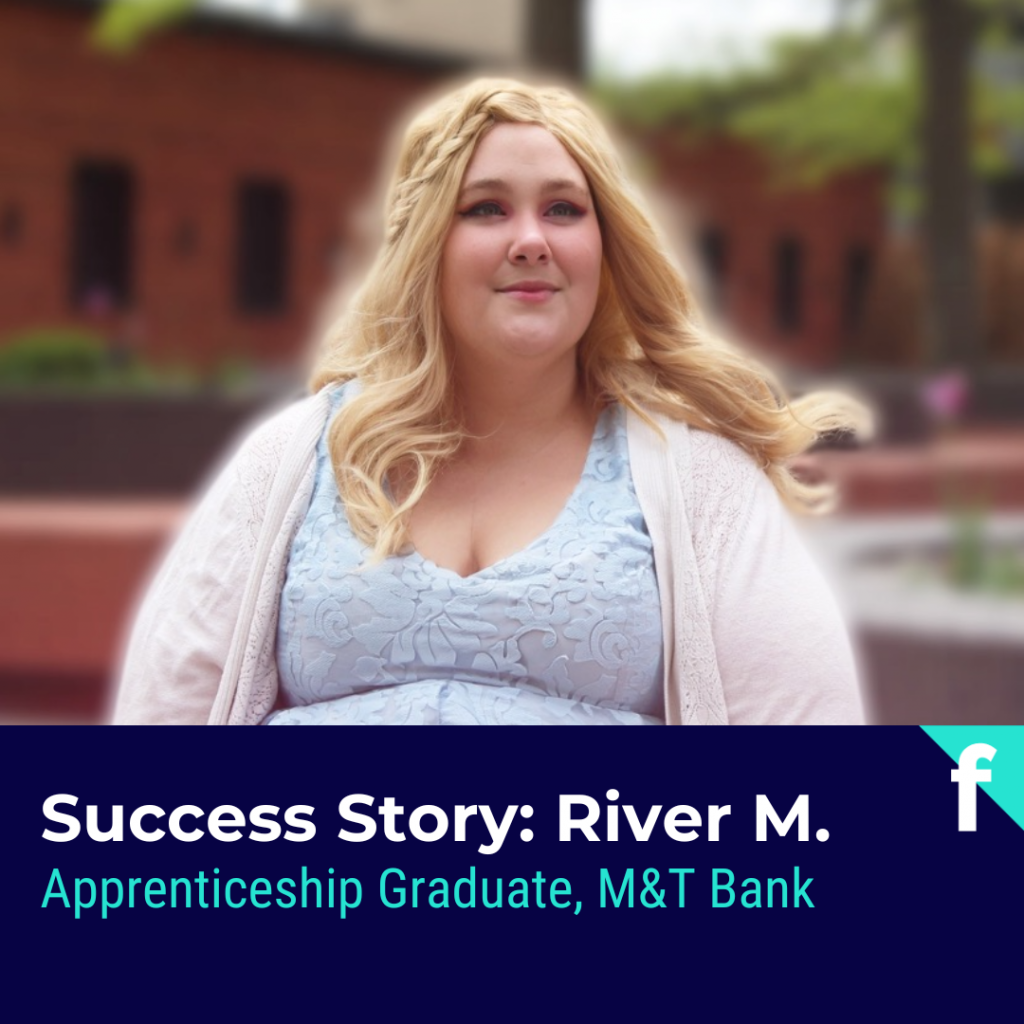